The picturesque seaside village of Stoupa, situated 45 km from the city of Kalamata, belongs to the Municipality of Lefktro in the area of Messinian Mani. Built on the enchanting coast of southern Peloponnese, it is bound to impress you with the contrast between mountain and seaside landscape. 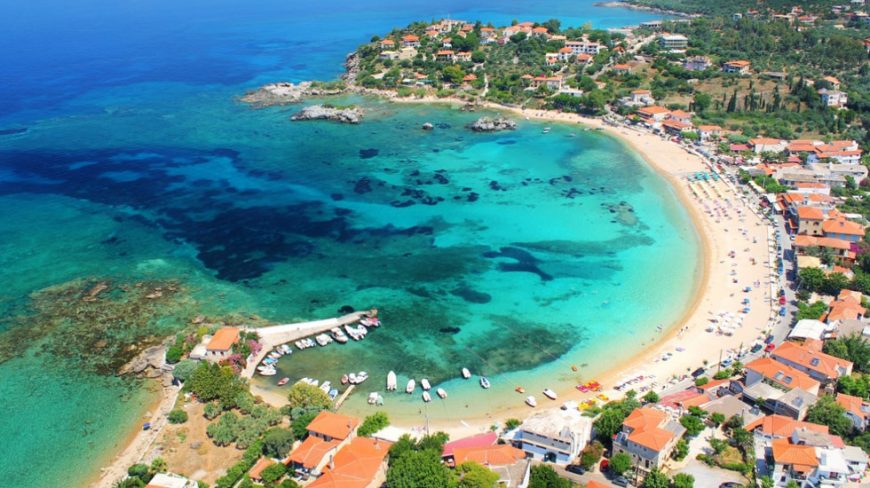 Stoupa is built between two bays with sandy beaches by the foothills of Taygetos Mountain, a site surrounded by olive oil orchards.

The initial name of the village was Potamos (= river), due to the river (stream) that crossed it. Later, the name changed to Stoupa. There are two scenarios about the origin of the new name: According to one scenario, the name comes from the Albanian word for “beach”. The other scenario has it that the name comes from the linen fibres (stoupia) collected by the locals and treated there with seawater for softening and easier handling.

To the east of the village rises the castle, which used to be the acropolis of the ancient town of Lefktro. This castle has been conquered many times by Franks and Venetians.

According to the historian Pausanias, in the ancient town of Lefktro existed a temple and a statue dedicated to goddess Athena. During the occupation by the Franks (1204-1259) the castle was rebuilt and it was named Beaufort castle.

The newly built village of Stoupa has developed to a well-known tourist centre, as it is an ideal vacation spot, for any time of the year, offering many amenities for a relaxing holiday.

Stoupa is endowed with a diverse landscape and it is justifiably regarded as a rear jewel of nature. With Stoupa as the starting point, one can take a tour of the magnificent Taygetos mountain, enjoy the tranquillity of the natural environment in the Vassiliki forest, admire the lofty towers of Mani, the little coves, the picturesque churches, the caves, the great mountain-gorges of Viros and Ridomou, and the neighbouring villages with their narrow stone-paved streets. The tours in the surrounding area evoke strong emotions.

The two organized sandy beaches with crystal-clear water attract thousands of tourists every year. You can swim at the excellent beach of Stoupa with the clear waters, by the rocks of Halikoura beach, or, you can enjoy the unique sandy beach of Kalogria, with shallow water, ideal for kids. For the sports enthusiasts, Stoupa offers plenty of water sports, such as diving, water-skiing, etc.

The beautiful beach of Kalogria became famous all around the world, as this was the place where the famous Greek writer Nikos Kazantzakis and Alexis Zorbas stayed in 1917, operating the mines of Prastava, which can still be visited.

That’s where the two men became close friends and the famous writer got the inspiration for his unique novel “Zorbas the Greek“.

Kazantzakis and his wife Galatia, hosted many Greek personalities in the area, such as the famous writer Angelos Sikelianos with his wife Eva, and the famous Greek actresses Marika Kotopouli and Kyveli.

In Stoupa you can find many hotels and rooms to rent, for a comfortable and enjoyable accommodation, as well as many taverns and restaurants that cover most culinary preferences.

Stoupa, preserving the architectural tradition of Mani and the local folkways, extends an open invitation to you to enjoy the impressive scenery and admire one of the most enchanting sunsets of the Messinian Gulf. 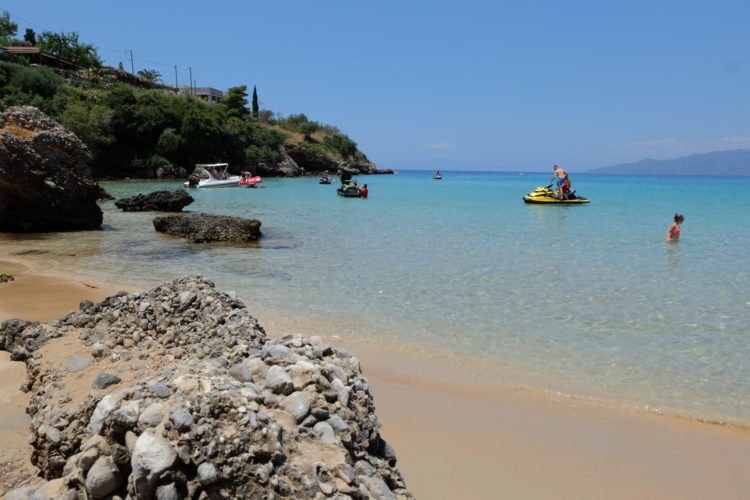 Stoupa and the surrounding area has always attracted artists and writers. In the past five or so years, this has blossomed into a thriving cultural scene. The Nartura group organises festival throughout the year, including one in September that celebrates the famous friendship between Kazantzakis and Zorba, and another in June that takes place on Lefktron hill (the former Crusader stronghold of Beaufort Castle) overlooking Stoupa. Smaller events including bar theatre and Celtic music nights are dotted throughout the year. Local artists created the Mani Pulse festival in September, with the focus on the visual arts and music. Some local British writers (modesty forbids, etc.) have started a literary festival in October, which includes free creative writing workshops, book launches, talks, performances and ‘meet the author’ events. From the foothills of the Himalayas to Colditz, whenever the number of Brits in a place reaches a critical mass, the inevitable happens: we do am dram. The Neon Players perform once or twice a year, usually British comedy, usually in the winter.

There is a vibrant local music scene too. If you’re visiting Stoupa, look out for posters and blackboards advertising live music at tavernas and bars. The Parea Sti Mani website and Stoupa Life Facebook group can be useful sources of information, but many events are still advertised by poster and word-of-mouth only. In the summer especially, you may see panegyris advertised. If you’ve never experienced one of these traditional Greek village celebrations, they are not to be missed. One of the biggest takes place in Neoxori, a couple of kilometres from Stoupa, on the last Friday of July. Another popular event is the Chestnut Festival held around the third Saturday in October in the mountain village of Kastania. With free roasted chestnuts and chestnut soup; souvlakis, wine and beer for sale; live music from midday to the early hours, this is a well-organised party not to be missed if you’re here in the autumn.

Another recent addition to the Stoupa calendar is the Maniacs 10k Run, which takes place on the first Saturday in July. There is also a 1k route for parents and toddlers and a 5k option. The evening run is now preceded by a swimming event. Local hero Nikodimos usually wins the men’s 10k, but it’s a fun event for runners of all abilities.

Dive Code is a PADI approved diving centre based on Kalogria beach. They can organise one-off dives or you can follow a certificated course.

If you fancy doing something a little different on holiday, The Olive Grove creative holidays run weekly mosaicking courses at Patriko bar. Patriko is also the summer meeting place of the local Stitch’n’Bitch group. You are very welcome to join them any Thursday morning from 11, even if you haven’t brought your needlecrafts on holiday with you. They’re a friendly lot, though I’ve always found it a bit light on the bitching.